In the mid 1500s merchants would trade a bird called the “Guinea fowl” (Genus Numididae) imported from Madagascar, via the region of Turkey. Of course, Guinea is a Western African nation, and Madagascar is an Eastern African island, so clearly the people who were attributing names to the creature were pretty well already confused.

In any case, the English began calling the bird (Numididae) "turkey" because of the supposed country of origin. The Turks meanwhile, believed the same bird originated from India, and thus called it “Hindi” (incidentally the Turkish word for the country India is Hindistan). But this isn’t the only geographical association with Numididae. The dutch/norwegians have a name that associate the bird with Calicut, Macedonians “bird of Egypt”, and others “Dutch bird”, “bird of Greece” and “bird of Ethiopia”.

Things got somewhat more confusing because the Spaniards returned from the New World with a very similar, but distinct, bird that we commonly call “turkey” today (Genus Meleagrididae), which is indigenous to the Americas. As these birds appeared in Spain, also assisted by the common misunderstanding that the New World was “India”, the New World bird Meleagrididae took on the name applied to its eastern African cousin, Numididae.

As a bilingual speaker of Turkish and English, I have to smile when I hear the bird referred to as “turkey”, whereas in Turkish they call the word “India” (Hindi)... I’ve always wondered... “What do the Indians call it?”

Speaking to my coworker Krishna who hails from India, the name for "turkey" in his local dialect (many of the Indian states have their own dialect) is "Guinea" (or Guinea chicken). At least they got the right continent. :)

An Invigorating Autumn of Freedom and Equality

Two-score and five years ago, Dr. Martin Luther King Jr. delivered his now famous speech on the steps of the Lincoln memorial, within walking distance of the White House.

Today, with the election of Barack Obama to the highest office in the land, we've entered into "an invigorating autumn of freedom and equality". To be certain, this is only one chapter in Dr. King's dream, but across many of the states in this nation, freedom has rung and a historic ascent by a transformative leader is at hand. 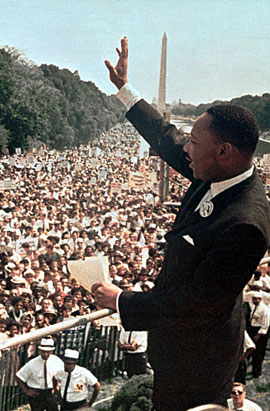 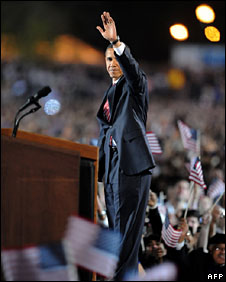